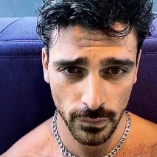 well that took a turn for the worse pretty quick....

Why are you bumping this to cause drama? We didn’t know exactly what was happening at that time.     Take a day off from trolling and go donate some of your spare time at a homeless shelter.