It’s not like her performances are decade-defining cultural moments and the Grammys are kind of out of touch with reality so they both saved some time.

Britney never acted like Ariana, Christina did, but not Britney. 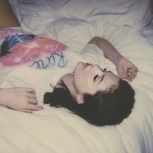 Can you get out of Ariana’s asshole for one second sis?! Lord the stanning is unreal with you